Rules and Expectations for TOP PRODUCER

This is a premier fun class offered by the APDR. This is the only fun class where the dogs are required to be REGISTERED with the APDR which can be done by clicking Single Dog Registration . We have chosen this class to honor the people who put in the time and effort to further this breed through selective and consistent breeding practices. We want to acknowledge their hard work and give them a chance to "show it off". This class comes with it own bragging rights trophy! There is a trophy for each sex, one for MALE and one for FEMALE. The Trophy for this class is a bulldog style decanter that will be filled with something special for both winners! Fee will be collect at the registration tent the day of the event.

.This will be a "one at a time" class where one set of Parent/Offspring will be brought in, do their lap, stack, down and back and show teeth, then be excused from the show ring to a holding area, and the next set will be ushered in. Once the sets have been seen by the judge then ALL sets will be asked back to the ring at the same time for a final once around lap before the Judge makes their decision.

Good Luck to all Participants!

Thank You for Signing up for our Premier Fun Class. Your Fee will be collected the day of the event at the registration tent! Good Luck! 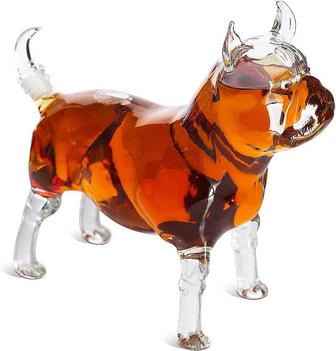