​JAGDTERRIER
ORIGIN : Germany.
UTILIZATION : hunting dog, suited for game underground, flushing, or treeing
GENERAL APPEARANCE : A smallish, generally black and tan, compact, well-proportioned working hunting dog.
Proportion of chest circumference to height at the withers : The circumference of the chest is 10 to 12 cm more than the height at the withers. Body length to height at the withers : The body is insignificantly longer than the height at the withers.
Depth of chest to height at the withers:  55-60 % of the height at the withers.
BEHAVIOUR / CHARACTER : Courageous and hard, takes pleasure in work, enduring, vital, full of temperament, reliable, sociable and trainable, neither shy nor aggressive.
HEAD : Elongated, slightly wedge shaped, not pointed, the muzzle slightly shorter than the skull from occiput to stop.
CRANIAL REGION : Skull : The skull is flat, broad between the ears, narrower between the eyes. Stop : Slightly marked.
FACIAL REGION :
Nose : In balance with the muzzle, neither too narrow nor too small, not cleft. Black, but when the color of the coat is dominantly brown, a brown nose is also permitted.
Muzzle :Strong, distinct under jaw, strongly pronounced chin.
Cheeks : Well pronounced.
Lips: Tight and well pigmented.
Jaws/Teeth : Big teeth. Strong jaws with a perfect, regular and complete scissor bite, whereby the row of upper incisors, without gap, perfectly locks over the lower incisors, and with the teeth standing vertically to the jaws. 42 teeth in accordance with the teeth formula.
Eyes : Dark, small, oval, well placed in such a way that injury is hardly possible; the eyelids are tight. Resolute expression.
Ears : Set high, not explicitly small, V shaped; slightly touching semi drop ears.
NECK :
Strong, not too long, well put on and blending strongly into the shoulders.
BODY :
Topline : Straight.
Withers : Well defined.
Back : Strong, straight, not too short.
Loin : Well muscled.
Croup : Well muscled and flat.
Chest : Deep, ribs well sprung, not too broad, long breastbone with ribs well reaching backwards.
Underline : curved backwards; short and firm flanks, belly slightly drawn up.
TAIL :
Well set to the long croup, docked  1/3. Is rather carried slightly raised not steeply erected, but should never incline over the back
FOREQUARTERS :
General : Seen from the front the forelegs are straight and parallel, viewed from the side they are placed well under the body. The distance from the surface to the elbows is about equal to the distance from the elbows to the withers.
Shoulders : The shoulder blade lies well oblique and backwards; it is long and strongly muscled. There is good angulation between shoulder blade and upper arm.
Upper arm : As long as possible, well and dry muscled.
Elbows : Close to body, neither turned inward nor outward. Good angulation between upper arm and forearm.
Forearm : Dry, straight and upright with strong bones.
Pastern joint : Strong.
Pastern : Slightly angulated to the ground, bones rather strong than fine.
Forefeet : Often broader than the hind feet, the toes lying close to each other with sufficiently thick, hard, resistant and well pigmented pads. They are parallel, in stance as well as in movement neither turned inward nor outward.
HINDQUARTERS :
General : Viewed from behind straight and parallel. Good angulation between upper thigh and lower thigh and also at the hocks. Strong bones.
Upper thigh : Long, broad and muscular.
Stifle : Strong with good angulation between upper and lower thigh.
Lower thigh : Long, muscular and sinewy.
Hock joint : Strong and placed low.
Hocks : Short and vertical.
Hind feet : Oval to round, the toes lying close to each other, with sufficiently thick, hard, resistant and well pigmented pads. They are parallel, in stance and in movement neither turned inward nor outward.
GAIT / MOVEMENT : Ample ground covering, free, with good reach in the front and powerful drive from the rear. In front and hindquarters parallel and straight; never stilted. SKIN : Thick, tight, without folds.
COAT
HAIR : Plain, dense; hard rough hair or coarse smooth hair.
COLOR : The color is black, dark brown or greyish black, with fawn (yellow red) clearly defined markings at the eyebrows, muzzle, chest, the legs and at the base of the tail. Light and dark mask is equally permitted; small white markings on chest and toes are tolerated.
SIZE AND WEIGHT :
Height at the withers : Dogs : 13 to 15.7 in·        Bitches : 13 to 15.7 in
Weight: Dogs : 19.8 to 22 lb·        Bitches : 16.5 to 18.7 lb
FAULTS : Any departure from the foregoing points should be considered a fault and the seriousness with which the fault should be regarded should be in exact proportion to its degree and its effect upon the health and welfare of the dog. Missing of one or both M3 (Molars) is not to be considered a fault.
SERIOUS FAULTS :
•    Narrow skull, narrow and also pointed muzzle.
•    Falling away under jaw, narrow jaws.
•    Weak bite, any slight irregularity in the placing of the incisors.
•    Light or spotted nose.
•    Light, too big or protruding eyes.
•    Erected, flying, too small, set too low or heavy ears.
•    Steep forequarters.
•    Soft or roached back, too short back.
•    Short breastbone.
•    Too narrow or too wide in front.
•    Steep hindquarters, overbuilt.
•    Elbows clearly turned in or out.
•    Too close or spread toes; cow-hocked, bow-legged or narrow hocks, in stance as well as in movement.
•    Ambling, stilted or tripping gait.
•    Splayed feet, cat feet.
•    Tail inclining over the back, tail set too low or hanging.
•    Short, woolly, open or thin hair, bald at the belly or at the inner sides of the thighs.
DISQUALIFYING FAULTS :
•    Aggressive or overly shy.
•    Weak in temperament and character, shot or game shy.
•    Over and undershot bite, wry mouth, pincer and partial pincer bite, irregularly placed teeth, missing teeth except for M3.
•    Incorrect pigmentation.
•    Entropion and ectropion, eyes of different color, blue or spotted eyes.
•    Any departure of the described coat color.
•    Over and under size. Any dog clearly showing physical or behavioral abnormalities shall be disqualified.
Male animals must have two apparently normal testicles fully descended into the scrotum. 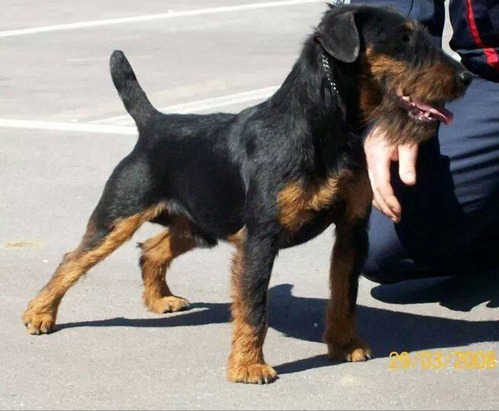