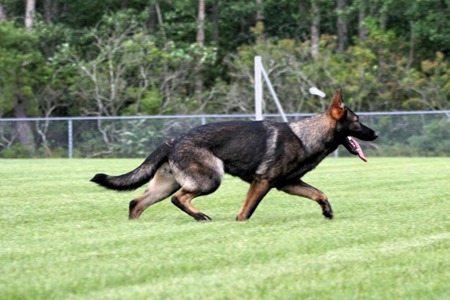 "Take this trouble for me: Make sure my shepherd dog remains a working dog, for I have struggled all my life for that aim."

A standard was developed based on mental stability and utility.The originator of the breed's motto was "Utility and intelligence". To him beauty was secondary, and a dog was worthless if it lacked the intelligence, temperament, and structural efficiency that would make it a good servant of man.

The breeding value of the dog must be based entirely and decisively upon the totality of health, endurance, authentic working structure and stable mind, body and temperament.

Sport, trend and fad breeding leads to extreme physical exaggerations and therefore to breeding situations that have the sole purpose of creating the most deformed animal for the highest price tags which of course has nothing to do with original working ability. This may seem nice to the newcomer or pet owner or hobbyist, however, for the true steward of the animal who does not engage in matters based on eye appeal, it appears as a strange cartoon and mockery.

Over-sized, massiveness, extreme bone, extreme angulation, height, racing ability, straight front or tucked up racing dog body would be for the shepherd an adverse perception leading to the death of the breed.

The German Shepherd Dog, whose methodical breeding was started in 1899 after the foundation of the society, had been bred from the German breeds of the herding dogs existing at that time with the ultimate objective of creating a BALANCED AND UNIVERSAL working dog inclined to high achievements in multiple pursuits. In order to achieve this objective, the breed standard of the German Shepherd Dog was determined and it relates to the physical constitution as well as the traits and characteristics.

The German Shepherd Dog is medium-size, may be slightly elongated or of square build, powerful and well-muscled, with substance to the bone and firm overall structure.

"The most striking feature of the correctly bred German Shepherd are firmness of nerves, attentiveness, unshockability, tractability, watchfulness, reliability and incorruptibility together with courage, fighting tenacity, and hardness."

The character is as important at least, if not more important than anything else in the standard.

The German Shepherd Dog must be well-balanced and stable (with strong nerves) in terms of character, aloof, intelligence, courageous, self-assured, (except for a stimulated situation) good-natured as well as attentive. They were a dog used in war and so intelligence, courage, and power were important. He must possess instinctive behaviour, resilience and self-assurance in order to be suitable as a companion, guard, protection, service and herding dog.

He should have enough drive but not so much that he can not think.

The head is wedge-shaped and in proportion to the body size (length about 40 % at the height at the withers), without being plump or too elongated, moderately broad between the ears. Seen from the front and side, the forehead is only slightly arched and without any or with only a slightly indicated middle furrow.

The nasal dorsum is straight, any dip is undesirable. The lips are taut, close well and are of dark colouring.

The nose must be black.

The teeth must be strong, healthy and complete (42 teeth according to the dental formula). The German Shepherd Dog has a scissor bite, i.e. the incisors must interlock like scissors, whereby the incisors of the upper jaw overlap those of the lower jaw. Occlusal overlay, overbite and retrusive occlusion as well as larger spaces between the teeth (gaps) are faulty. The straight dental ridge of the incisors is also faulty. The jaw bones must be strongly developed so that the teeth can be deeply embedded in the dental ridge.

The eyes are of medium size, almond-shaped, slightly slanted and not protruding. The color of the eyes should be as dark as possible. Round eyes are undesirable since they impair the dog’s impression.

Ears - The German Shepherd Dog has erect ears of medium size, which are carried upright and aligned (not drawn-in laterally); they are pointed and with the auricle facing forward.

Tipped ears and drooping ears are faulty. Ears carried rearward when moving or in relaxed position are not faulty.

Neck - The neck should be strong, well-muscled and without loose neck skin (dewlap). The angulation towards the trunk (horizontal) amounts to approx. 45 %.

Body - The upper line runs from the base of the neck via the high, long withers and via the straight back, without visible interruption. The back is moderately long, firm, strong and well-muscled. The loin is broad, short, strongly developed and well-muscled. The croup should be long and may be slightly sloping (approx 23° to the horizontal) and the upper line should merge into the base of the tail without interruption.

The chest should be moderately broad, the lower chest as long and pronounced as possible.

The ribs should feature a moderate curvature; a barrel-shaped chest is just as faulty as flat ribs.

The tail extends at least to the hock, but not beyond the middle of the hind pastern. It has slightly longer hair on the underside and is carried hanging downward in a gentle curve, whereby in a state of excitement and in motion it is raised and carried higher, but not beyond the horizontal. Operative corrections are forbidden.

Shoulder blade and upper arm are of equal length, and firmly attached to the trunk by means of powerful musculature.

The elbows may not be turned out either while standing or moving, and also not pushed in. The forearms are straight when seen from all sides, and absolutely parallel to each other, dry and firmly muscled. The pastern has a length of approx. 1/3 of the forearm, and has an angle of approx. 20° to 22° to the forearm. A slanted pastern (more than 22°) as well as a steep pastern (less than 20°) impairs the suitability for work, particularly the stamina.

The paws are rounded, well-closed and arched; the soles are hard, but not brittle. The nails are strong and of dark colour.

The position of hind legs is slightly backwards, whereby the hind limbs are parallel to each other when seen from the rear. Upper leg and lower leg are of approximately the same length; the legs are strong and well-muscled.

The hocks are strongly developed and firm; the hind pastern stands vertically under the hock.

The paws are closed, slightly arched; the pads are hard and of dark color; the nails are strong, arched and also of dark color.

The German Shepherd Dog is a trotter. The limbs must be coordinated in length and angulations so that the dog can shift the hindquarters towards the trunk without any essential change of the top line and can reach just as far with the forelimbs. Any tendency towards over-angulation of the hindquarters reduces the stability and the stamina, and thereby the working ability. Correct body proportions and angulations results in a gait that is far-reaching and flat over the ground which conveys the impression of effortless forward movements. The head pushed forward and the slightly raised tail result in a consistent, smooth trot showing a gently curved, uninterrupted upper line from the ear tips over the neck and back to the end of the tail.

Skin - The skin is (loosely) fitting, but without forming any folds.

The German Shepherd Dog is bred in the hair varieties double coat and long and harsh outer coat – both with undercoat.

The guard hair should be long, soft and not close fitting, with tufts on the ears and legs, bushy trousers and bushy tail with downward formation of tuft. Short on the head, including the inside of the ears, on the front side of the legs, on the paws and toes, somewhat longer and more strongly covered in hair on the neck, almost forming a mane. On the back side of the legs the hair extends to the carpal joint or the hock and forms clear trousers on the back side of the haunches.

Colors are sable, black, black with reddish-brown, brown and yellow to light grey markings; single-colored black, grey with darker shading, black saddle and mask. Unobtrusive, small white marks on chest as well as very light color on insides are permissible, but not desirable. The tip of the nose must be black in all colors. Dogs with lack of mask, as well as with light to whitish markings on the chest and the insides, pale nails and red tip of tail are considered to be lacking in pigmentation. The undercoat shows a light greyish tone. The color white is not allowed.

Male dogs should have two obviously normally developed testicles which are completely in the scrotum.

Any deviation from the aforementioned points should be considered as a fault whose evaluation should be in exact proportion to the degree of deviation.

Deviations from the above-described breed characteristics which impair the working capability.

a) Dogs with weak character and weak nerves which bite

f) Dogs with dental faults, with lack of:

1 premolar 3 and another tooth, or

a total of 3 teeth or more

Overshot by 2 mm and more, undershot, level bite in the entire incisor region

h) Dogs with oversize or undersize by more than 1 cm

l) Long-haired (long, soft guard hair without undercoat, mostly parted in the middle of the back, tufts on the ears and legs and on the tail)