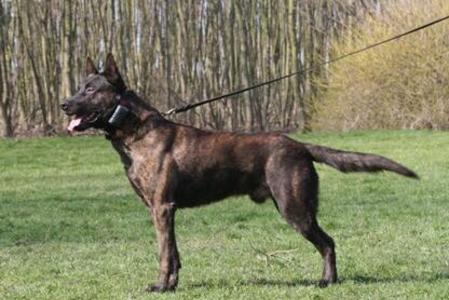 GENERAL APPEARANCE:  A medium to large sized, middle to heavy weighted, well-muscled dog of powerful and well-balanced structure. A dog with endurance, a lively temperament and an intelligent expression. The breed should exhibit a demanding and pronounced structure and appearance. The athletic yet durable appearance should be very pronounced.

IMPORTANT PROPORTIONS: The length of the body (from point of shoulder to point of buttock) exceeds the height at the withers, approximately at a ratio of 10:9, as suits a trotting dog. The proportion of the length of the skull to the muzzle is 1:1

BEHAVIOR/TEMPERAMENT: Very loyal and reliable, always alert, watchful, active, independent, with persistence, intelligence, strong willed, head strong yet compliant. The Working Dutch Shepherd (Holland Herder) works willingly together with its owner and he deals independently with any task which is assigned to him. Human aggression is an attribute that is understood within the breed and acceptable taking into consideration the working nature of the breed, long time usage of the breed as Police Service Dogs and usage in Protection Sports.

HEAD: In good proportion to the body. Seen from above and in profile, it is wedge-shaped. Its shape can be elongated, without wrinkles; dry, with strong muscled cheek bones. Because of the variations in size and structure from male to female the head structure between the sexes can vary, but should follow the standard according to sex. Females can and will have an acceptable squarer head.
Skull: Flat
Stop: Slight, though clearly present.
Muzzle: Slightly longer than the flat forehead. Bridge of the muzzle straight and parallel to the top line of the cranial region.
Nose: Black.
Lips: Tight and well pigmented.
Jaws/Teeth: Scissors bite, strong, regular and complete.
Eyes: Dark or light colored and medium sized. The eyes are almond shaped and slightly oblique. The eyes should not be set too wide and should not protrude.
Ears: Medium to Large sized. When the dog is alert, the ears are carried high and erect.

NECK: Not too short, dry, without folds and gradually flowing into the body. Thick and strong with dense muscle.

BODY: Firm, but not coarse.
Top line: There is a smooth, transition from the neck to the top line of the body, in which head and neck are carried in a natural pose.
Back: Straight and firm.
Loin: Firm, neither long nor narrow.
Croup: Slightly sloping, not short.
Underline and belly: Slight tuck up.
Chest: Deep and long enough, not narrow, ribs slightly sprung

LIMBS:
FOREQUARTERS:
The forelegs are powerful, of good length, well-muscled. The bone is solid and may be heavy. Always generally showing a straight line, but with sufficient suppleness of pastern.
Shoulder: Shoulder-blades well joined to the body and well sloping.
Upper arm: Approximately equal length to the shoulder-blades and well angulated with the connecting bones.
Elbows: Well attached. Forefeet Oval. Well knit, toes arched. Preferably black nails and dark pads.

HINDQUARTERS:
The hind-legs are powerful and well-muscled. The bone is solid and 2/3’s the thickness of the front. Not excessively angulated.
Thigh and lower thigh: Of approximately equal length.
Hock: Perpendicular below the point of buttock.
Dewclaws: Preferably none present
Hind Feet: Oval. Well knit, toes arched. Black nails and dark pads

GAIT/MOVEMENT:
The Working Dutch Shepherd (Hollandese Herder) is a trotter with free, smooth and supple movement.

COLOR:
Brindle: The basic color is brown or grey. Brown can vary from light sand colored to chestnut red. The brindle is clearly present all over the body, in the ruff, breeches and tail. Brindle can vary is how much black is shown. Color variations with the brindle are acceptable. A black mask is preferable.
Heavy white markings on chest or feet is not desirable, but will not be counted as a fault.

Black: Black is an accepted color with the Dutch Shepherd (Holland Herder)

SIZE AND WEIGHT:
Height at the withers:

COAT:
Short hair: All over the body, quite hard, close-fitting, not too short coat with woolly undercoat. Ruff, breeches and tail plume are clearly visible.

Long hair: All over the body, long, straight, well fitting, harsh to the touch, without curls or waves with a woolly undercoat. Distinct ruff and breeches. Tail abundantly coated. Head, ears and feet and also the hind legs below the hocks are short and densely coated. The backsides of the forelegs show a strongly developed coat, shortening in length towards the feet, the so-called feathering. No fringes at the ears.

TAIL:  At rest, hanging straight down or with a slight curve. Reaches to the hock. In action, carried gracefully upwards, never curled or carried sideways.

FAULTS: Any departure from the foregoing points should be considered a fault and the seriousness with which the fault should be regarded should be in exact proportion to its degree and its effect on the functional health and welfare of the dog.

Lack of breed-type:
Any dog clearly showing physical of behavioral abnormalities shall be disqualified.
Male animals should have two apparently normal testicles fully descended into the scrotum.