​​​​
The American Working Red has its roots in the Old Family Red Dogs (American Pit Bull Terrier). Decades ago Hunters in the Southeast needed a dog that had the drive, determination, and ability to catch wild hogs and hold them until the hunter arrived. Over time the process of selecting the best functioning specimens produced a larger dog with traits specific to the function of Hog Hunting and so a new breed arose, the “American Working Red”.

Color:  Red, Red Brindle, or Chocolate and can have white markings.

Temperament:  Friendly with Humans but High Prey drive towards animals. Due to the breed being descended from the American Pit Bull Terrier moderate dog aggression should be expected but should be bred away from.

Some of the bloodlines associated with the American Working Red but not limited to are Camelot, Dangerzone, McKenna, and Peterson.

With the population explosion of Wild Hogs throughout the United States these magnificent dogs have a much needed purpose and can be counted on to be some of the best Hog Dogs on the planet. They are the “American Working Red". 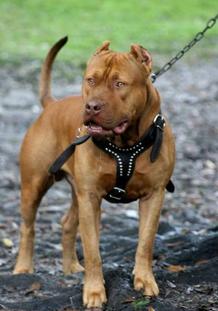