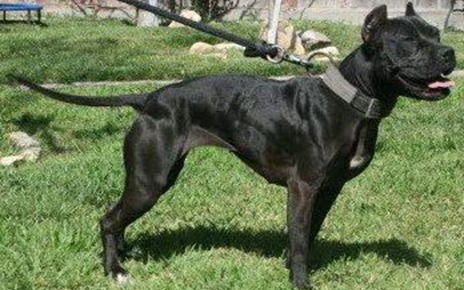 There are many other standards for the APBT devised by various registries throughout the world. We at APDR  consulted with various veteran dogmen in arriving at our standard for conformation but would like to specifically thank James Crenshaw, Richard Stratton, Floyd Boudreaux, and Bert Sorrell for their contributions

The APDR conformation Champion should reflect the great dogs of yesteryear. The problem is that there was so much variation in appearance, since the dogs where bred for performance. In putting together this standard, some of the top dogs of all time where considered. The traits that all the dogs had in common were the ones that were incorporated in to the standard.

Obviously, there are very few perfect specimens, so it is not expected for a show winner to be exceptional in all areas but in general a balance of many good traits is preferable to an outstanding head or a perfect tail or other near perfect trait.

A smooth short coat, well balanced dog, giving the impression of great strength and ability. The demeanor should be fearless and bold, but the temperament MUST be totally reliable with people. The gate should be powerful and fluid a dog with exceptional conformation should seem to glide across the ground effortless in his stride.

The head should be wedge shaped and short and deep as compared with most other breeds with powerful jaw muscles.

Generally, a dark eye is preferred, but the color of the coat must be taken in to account red dogs with red noses may have a lighter (*reddish or yellowish) eye without penalty and the lids on dark dogs should be uniformly dark.

The ears should be rose (half pricked), not large and heavy. Full dropped and fully erect (bat ears) are undesirable; however, ears are not an important trait as compared to the rest of the dog.

The mouth should be tight and clean. The incisor teeth should comprise a scissor bite meaning the top teeth should fit tightly over the bottom teeth. The canine teeth should also fit together tightly. Undershot mouths, although not desired should not be considered a serious fault.

The neck should have a slight arch, Muscular but not short, free from extreme looseness of skin.

The body should be muscular with good bone. There should be a slight incline from the wither to the rump the idea being to provide leverage for a driving dog a short back with a slight roach is preferred.

The stifle should be well bent, with the femur (hip bone) shorter than the tibia and fibula (bones in the lower part of the leg). The feet should point forward when the dogs walks. A dog should not be considered cow hocked if its rear feet momentarily point outward when standing.

The tail should be shaped like a pump handle, with the tip about even with the hock. It should not be carried over the back the hair should be short. A docked tail is a major fault.

The breed has Historically been of great size variation however Males are preferred Not over 70 LBS Female are preferred not over 60 LBS as extremely large dogs seldom show fluid and agile movement.

Any departure from the forgoing points should be considered a fault. The seriousness of the fault shall be regarded in the proportion to its degree a balance of these points is what important here a dog that is clearly superior in conformation to the others but has an undershot bite should still place above the others.